The Economic Reality of the Laws of Thermodynamics

Early statements of the Laws of Thermodynamics were framed in terms of heat and heat engines. Even today most engineering and science students are introduced to thermodynamics through heat principles. The 1st Law of Thermodynamics (Conservation of Energy) states that total energy (work done by/on a system plus heat transferred to/from a system) is conserved in a closed system. The 2nd Law says that heat is converted incompletely into work (dissipated) or that efficiency is never complete. The 3rd Law says that absolute zero temperature is unattainable.

More popular modern statements of the 2nd Law state that entropy (a measure of disorder) is constantly increasing for any closed system. While the 2nd Law is sometimes difficult for humans to accept, it is interesting that there are well known colloquialisms which incorporate the underlying meaning of the 2nd Law. Good examples are Murphy’s Law (“Anything that can go wrong will go wrong”) and the nursery rhyme, “Humpty Dumpty sat on a wall. Humpty Dumpty had a great fall. All the King’s horses and all the King’s men couldn’t put Humpty together again. 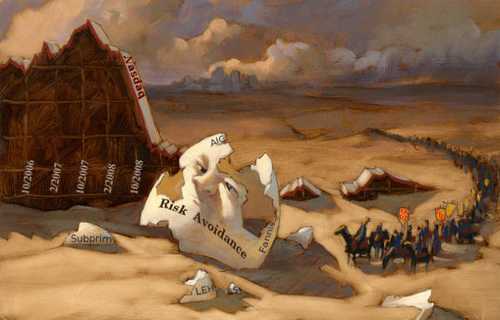 Reprinted and modified with permission from Scott J. Wakefield (http://www.scottjwakefield.com)

Although most formal applications of the Laws of Thermodynamics are found in the sciences and engineering, these laws very definitely apply to everything! That brings me to my next point.

Milton Friedman, the Nobel economics laureate, is famous for his expression: “There ain’t no such thing as a free lunch” (TANSTAAFL). Many of you will immediately recognize this as a typical conservation law. It is in fact substantially equivalent to the 1st Law of Thermodynamics (although money is not perfectly equivalent to total energy). What may be less obvious is that the 2nd Law of Thermodynamics also has important applications to economics, and it involves the concept of financial risk. In essence, risk is something akin to the opposite of efficiency.

In recent weeks we have seen huge upheaval (dissipation) in U.S. and world financial markets. This disaster had its genesis in what we can now understand as an attempt to violate the 2nd Law of Thermodynamics. During the real estate boom of the early 21st century, Wall Street banks bought large swaths of mortgage securities in conjunction with certain financial derivatives based on credit swaps. The combination of mortgage securities and derivatives was believed to be a way to greatly minimize risk associated with mortgage defaults. Unfortunately, the 2nd Law guarantees there is always going to be a significant level of risk. If bankers and other investors had understood and acknowledged this point, they never would have invested so heavily in mortgage securities, money for mortgages would never have been so easy to get, fewer defaults would have occurred, and a decline in the real estate market would not have devasted our financial markets.

This brings me to my final point. For years top accountants have been agonizing over how to produce standards for identifying dangerous or inappropriate investment schemes in derivatives. A very sound approach would be to use the Laws of Thermodynamics. In fact there is a specific formalism used by engineers and scientists to identify 1st and 2nd Law violations. It’s called perpetual motion. It should not be difficult to establish concrete principles for testing financial instruments and schemes for perpetual motion of the economic kind. We would be much better off as a society if such approaches were used to monitor and regulate our economy and its various parts.