Yesterday morning I decided it was time to get out and assess conditions on at least part of the course for the Logan Peak Trail Run. In any normal year, Scott Datwyler and I would have already been to Logan Peak by now. But with much larger than normal amounts of precipitation and average temperatures 10-15 degrees below normal, this is no normal year. I took one of my sled dogs and headed for Providence Canyon.

We ran up the canyon road for a mile or so, then forded the creek and picked up the new Providence Canyon single-track trail. I moved a few tree limbs off the trail here and there, but the new trail is in surprisingly good condition for this early in the season. The only part of it that needs work is the quarter-mile section above the old shooting range (roughly 2 miles up the canyon). In this section, the new trail becomes indistinct amongst the many old jeep trails and the many new ATV tracks and cow paths.

At the quarry (6700 ft.), I stopped to get out trekking poles, Yaktrax, and nordic ski gaiters. I also switched from a short sleeve shirt to a light-weight long sleeve thermal. It was a nice day, but the presence of so much snow was enough to lower the air temperature by a good 10 degrees relative to the lower canyon.

It’s always a stiff climb from the quarry to the top of the canyon. Fortunately even at mid-day the snow was very firm, and so I seldom sank more than an inch or two. About 3/4 mile above the quarry (7500 ft.), the South Syncline trail joins the Providence jeep trail. The junction is marked by a reflector mounted about five feet up an aspen tree. This reflector was at ankle level. A short way beyond there, we encountered fresh snow. 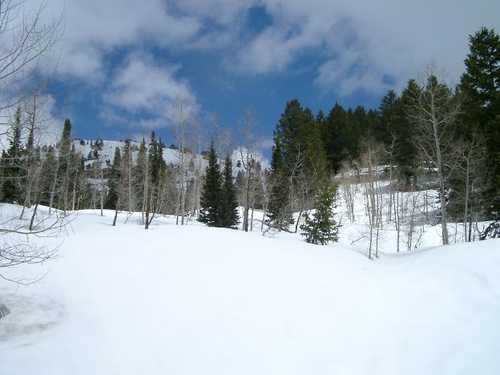 We continued the additional 3/4 mile to the junction of the Welches Flat jeep trail (LPTR course) and the Providence Canyon jeep trail (8100 ft.) At this point I estimated snow depth to be 6 feet, and the amount of fresh snow had increased to at least 6 inches, making traction poor. We turned around here and descended back down the canyon.

By race day, much of the course for the Logan Peak Trail Run is likely to be clear. However, I expect patches of snow along the S. Syncline trail in Logan Dry Canyon, along parts of the Welches Flat jeep trail, along much of the N. Syncline trail, and of course extensive snow on the climb to the peak.