My wife Gayle and I have worked as volunteers (aid station captains, flagging trail, etc.) for the Bear 100 since 2003. In 2007, I ran the Bear 100 (the last year of the old course). 2008 was the first year of the new course. I had run the Bighorn 100 earlier that season, and so I agreed to man an aid station and do some pacing. However by the time race day rolled around in 2008, it was obvious I was in really good condition and should have been running the race. Moreover I was thoroughly familiar with the new course. When it turned out that so many runners had problems navigating the new course, I made the decision then and there that I was going to run the new course this year.

There would be complications, however. Inadequate trail signage is/has been a nagging problem in the Cache Wasatch National Forest. Worse, we have persistent problems at ultra races in this area due to people (disgruntled hunters, disgruntled hippies, disgruntled motorized users, etc.) removing (or intentionally moving) trail flagging. Because of last year’s navigation problems on the new course, I volunteered this year to be in charge of course marking. I also really wanted to eliminate the longstanding hassle of putting up glow sticks along some 60 miles of the course immediately before dark. If I was going to accomplish these tasks AND run the Bear 100, I would have to get organized. I managed to put together a team of 12 experienced runners/hikers to mark the course. Then late in August, we came up with high intensity reflector technology to replace glow sticks for night time trail marking. Hopefully everything would go according to plan, because if it didn’t, I was going to end up spending a great deal of time fixing course markings while I was supposedly trying to race the Bear 100.

On race day it was slightly chilly at the start, but nowhere near as cold as normal in late September. We’ve been having a heat wave. At 6:00 AM everybody took off. Initially we were pretty well massed together. After passing ten people or so, I managed to settle in with a large group that went at a pace I liked. I remember it was nice chatting with friends and acquaintances from other races. But most of the first 5 or 6 hours of the race itself weren’t especially memorable to me; I spend too much time on that part of the course during the rest of the year. 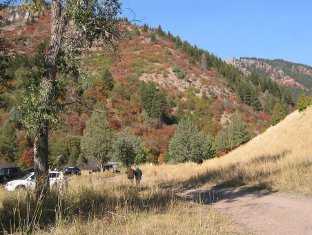 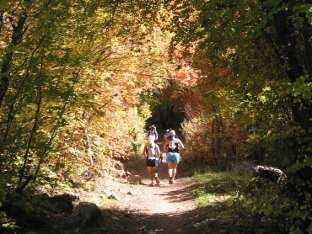 After screaming down Leatham Hollow, I was right on pace when I reached the Leatham aid station. There, Gayle was ready with my drop bag. After a quick shirt change, water bottle refills, and some melon, I was running again. The climb up Left Hand Fork and Richards Hollow was uneventful. Near the top of Richards, I caught up with Tim Seminoff and Errol Jones. Soon Errol and I took off fast on the descent to the Cowley aid station. Somewhere along there in the powdery dust that obscures the road underneath, I managed to stub my right middle toe on a rock. I slowed a bit, and at the Cowley aid station, I spent a couple minutes taping the toe tightly. It would annoy but not slow me the rest of the race.

The climb up the jeep road east of the Cowley Aid station was a pain. Many years ago, I rode that section frequently on a mountain bike, and I have a longstanding dislike for it. 1:30 PM on a warm day didn’t make it any better. I also encountered a few rough patches coming down Ricks Canyon—now there’s a surprise. Somewhere between miles 20 and 40, I ALWAYS have stomach/energy problems! Still, I managed to pull into the Right Hand Fork aid station about 35 minutes ahead of schedule, where Gayle was again waiting for me. After quickly modifying shoes and changing socks to fix an annoying insole problem, I was off again. I continued to struggle along the next section over to Temple Fork. I was eating and drinking regularly, but my energy wasn’t great, and my stomach was unhappy. Nevertheless, I managed to run most of Temple Fork and pulled into the aid station having lost only about 10 minutes of the cushion I had developed at Right Hand Fork. Gayle and Kelly Bradbury managed to patch me up, and I started up Blind Hollow towards Tony Grove. (Kelly—running partner and key protagonist in the ultrarunning DVD “Dancing the Bear”—would pace me later in the night.) 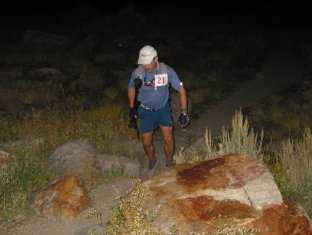 The course marking had so far been outstanding. My team of volunteers had done well! Now it was nearing dusk, and I was about to find out how well the night marking would work. I was traveling slowly up Blind Hollow. My energy was still poor. In fact, I wasn’t noticing ANY kind of improvement in energy level whenever I would eat some gel. That could mean only one thing: my stomach had shut down. Under those conditions, the only thing to do is drink LOTS of water and go slow. So that’s exactly what I did. Generally the night time trail marking was good along this section, but I did have to stop twice at junctions to put up reflectors (once where it was obvious that cows or elk had tried to eat the flagging attached to the reflector). While I was fixing the last junction, Milada (another of my running partners) caught up with me. She went on towards the Tony Grove aid station 0.3 miles ahead but asked if I wanted to run with her beyond Tony Grove. A few minutes later, I pulled into the Tony Grove aid station, where Gayle was waiting. I changed into warmer clothes, ate some soup and real food, and refilled water bottles. Then Milada and I left Tony Grove. We would run together for the next 25 miles.

From Tony Grove over to Franklin is one of my favorite trail sections. For some reason it just took forever this time. It wasn’t stomach or energy; both of these had by now recovered. It also wasn’t lighting; the combination of my white headlamp for distance vision and my belly light in red (contrast) mode for close trail visibility worked exceedingly well. Anyway, we pulled into the Franklin aid station nearly an hour behind schedule. After a very short stop, we were off for the climb up Steam Mill and over to Steep Hollow. I don’t remember this section feeling particularly slow, although I DID have to stop quite a few times to fix flagging/reflectors that had been removed by cows or elk (and probably in at least two cases by humans). By the time we reached the Logan River aid station, I was 1.5 hours behind schedule. After some soup, coffee, water refills, and a hot towel!!!, we started down the road toward the Logan River crossing. I’m practically a mountain goat on difficult technical trails, but give me a stream crossing and I am such a clutz. Sure enough, I got half way across the Logan River, and the next thing I knew I was standing in water up to my knees. Oh well… Peterson Hollow was COLD!!! My feet never did warm up after getting wet in the river, but it was my fingers that were REALLY freezing. Finally we started the climb out of Peterson up to the Long Hollow trail. Fortunately it was much warmer once we got up on the ridge and started down toward the Beaver Mountain Lodge aid station.

When we dragged into the Beaver Mountain Lodge aid station (mile 76), I was nearly two hours later than hoped. Fortunately my running partner, Kelly Bradbury, was waiting there to pace and get me back on track. Kelly and I traveled fast down Beaver Mountain, along the Beaver Creek and Sink Hollow roads, and even up the Sink Hollow climb to Gibson Basin. It was just getting light as we reached Gibson Basin. After soup and a couple of quick sips of wonderful Caffe Ibis coffee, we were flying off toward Beaver Creek. I felt strong descending into Beaver Creek, and after a short stop at the aid station, we began the dreaded trek up the Old Logan (jeep) Road. (This is my most hated part of both the old and new course—it seems to go on forever.) Finally… we reached the turnoff toward Red Pine Ridge—a steeper, but somehow more enjoyable climb than the Old Logan Road. I don’t remember a lot of the next few miles. I do remember that the autumn colors and the early morning sun were spectacular, and I remember it seemed to take forever to go the last mile or so on the road to the Ranger Dip aid station. Gayle was waiting there with my drop bag. I grabbed two gels and ditched my pack and poles. It was 10:06 AM when we left. 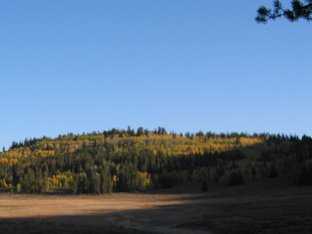 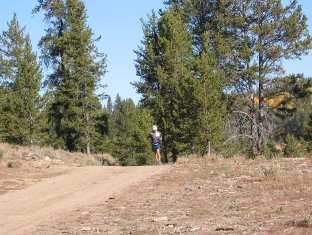 Now the push was really on. I remember climbing up Ranger Lift-Off (in fact I remember watching Kelly go up the steep trail in front of me, thinking “How can she possibly climb up this grade that fast?”). Eventually we reached the top, and I remember slowly running most of the next few miles. Then we were to the steep descent down into French Hollow. The trick to running this descent is to have a very fast leg turnover so that you give in to gravity while still maintaining control. The question was: “Can my tired legs turn over fast enough?” I started down, and amazingly everything seemed to flow. Before I knew it, we were down to the gentler descent along the bottom of French Hollow. Here, the newly revised course heads north across a low ridge to the Fish Haven road. “Uh oh, you mean we have to go UP that?” 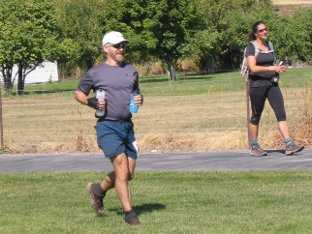 Eventually we came to the wet foot creek crossing, and then we were on the Fish Haven Canyon road. I remember Kelly was really trying hard to get me to the finish under 30 hours. She was yelling “Come on Bruce, faster. I know you can do it.” We were probably doing 9 minute miles, but it felt as hard as 6. We had 17 minutes left, and I had a sixth sense that the road was about 0.2 miles too far for a 30 hour finish. But I’ve occasionally been wrong about the clock in other races, so I tried my very best to keep going. At 30:00:15, we reached the main highway—a couple hundred yards left. I maintained the pace, and finished in 30:01:38.

I feel completely good about the finish! Sure, I missed 30 hours by a couple minutes. That fate was determined back in some of the slower sections during the night. Perhaps if I had managed my eating better during the heat of the previous day… Perhaps if I had not stopped to fix as many night time course markings… Perhaps if I had consumed more coffee at night… Blah, blah, blah. It is what it is. The new course is tougher than the old course, and I managed to finish the last quarter of the race faster than my overall pace—one of my primary goals. I’m Happy!!! Next time I’ll have to work on my performance over miles 50 – 75.

.  The course marking and night time reflectors had also worked out well.

Thanks to Gayle, Kelly, all the great aid station volunteers, and everyone else who made this adventure possible!