Last weekend, I decided it was time to get out for one last, long, high-country run this season. We had already experienced several early snowstorms, but most of the snow had melted below the 8500 – 9000 foot level. With another major snowstorm and cold temperatures predicted for the following Tuesday, it seemed likely that the high country would soon be too inaccessible for distance running. All summer long, I had been wanting to get back to some parts of the old Bear 100 course. This seemed like it might be a good opportunity. 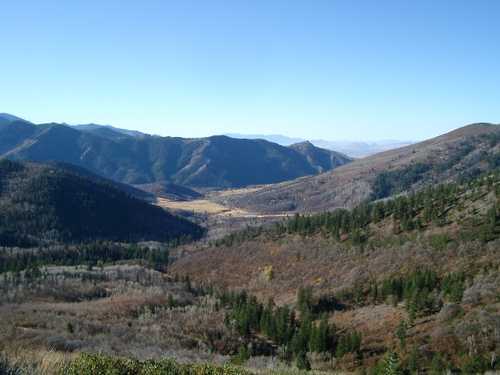 I drove up Cub River canyon to the base of German Dugway. My plan was to run up German Dugway to the top of Paris Canyon and then take the Highline Trail north over into Horseshoe Basin, on to the top of Dry Basin, and then back—about 20 miles round trip, with elevations ranging from 7000 – 8600 feet. By mid-morning it was already a gorgeous day: clear, 28 degrees fahrenheit, and no wind. Climbing up German Dugway, the ground was still nicely frozen, and running conditions were perfect. The vistas to the west were beautiful. I felt strong, and my dog and I made good time. Once we got over onto the Highline Trail, we began encountering mud in places where there had been a lot of recent ATV traffic. I wondered how bad this might get in another two hours.

The portion of Highline Trail that descends from the ridge into Horseshoe Basin is high and north facing. Here there was about six inches of firm, crusty snow, and the running was fantastic! As we reached Horseshoe Basin proper, we began to again encounter places with lots of sloppy, freeze-thaw mud. This continued all the way to the top of Dry Basin, except for about half a mile where the trail winds through a heavily protected forest of pines and firs.

On the return trip the mud was definitely getting worse in places, but overall not too bad. The views were still spectacular, and we flew down German Dugway to the car. The run took just over four hours—not bad considering the mud. It was a great way to end the main running season!