Timpooneke to Chris Flat and Back

Saturday it was time to run the trail from Timpooneke Trailhead to Chris Flat on the north and west of Mount Timpanogos (an 18 mile out-and-back). This section is actually mile 10 to 19 of a 50 K route which circumnavigates most of Mount Timpanogos from Vivian Park in Provo Canyon to Sundance. In fact years ago that 50 K route was my very first ultra distance. I’ve run the route a number of times since, but logistics for the full 50 K route are somewhat difficult.

Fifteen or twenty years ago this particular portion of trail was really hard to follow. Now it is pretty well marked. There are a few junctions and three Forest Service road crossings. Simply follow the markers for FS 151 to Chris Flat. This is a rough trail — part of the Great Western Trail which doesn’t get enough use. It climbs from 7300 ft at Timpooneke Trailhead to 8700 feet on the northwest shoulder of Mount Timpanogos, then descends to 7500 at the southern edge of Chris Flat. The section from Timpooneke to the shoulder is a forest trail. The section from the shoulder out onto Chris Flat is mostly open terrain. 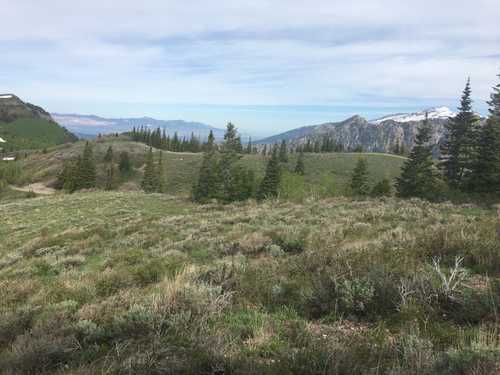 This year I expected lots of snow and deadfall. Surprisingly there was not too much deadfall; the worst was actually the 0.5 mile portion of trail closest to the trailhead. There was however plenty of snow — probably one third of the trail out to the shoulder was snow covered. Fortunately my sled dog Denali is really good at finding the trail. There was a sizable snow field along the ridge on the northwest shoulder (and over the middle forest service road crossing). Some of this snow was a bit steep, and route-finding wasn’t easy. Interestingly another hiker had to be rescued that same day from a similar snowfield on the Timpooneke Trail. I usually carry trekking poles on trails like this. A lot of runners/hikers seem unaware you can use the lower third of a trekking pole (possibly with basket removed) for self arrest on treacherous snow crossings.

The descent from the shoulder to Chris Flat is a nice, rolling, moderately technical single-track. There is another road crossing and then a spring shortly before Chris Flat. I always water my dog and refill my water bottles at the spring. In late Summer and Fall, this may be the only water after the creek above Timpooneke Campground 0.75 mile from the trailhead.

The return trip was uneventful. The area from Chris Flat to just past the shoulder is notorious for rattlesnakes (terrain and time of day). Fortunately there were no rattlesnake encounters this trip.