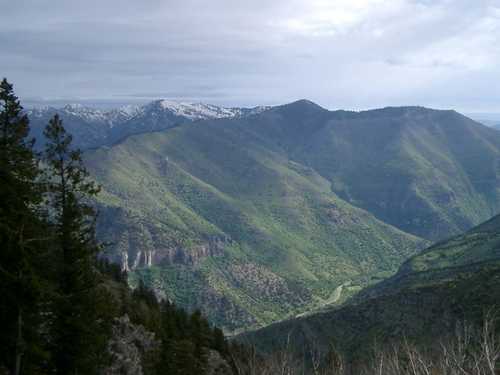 A month ago, snow levels were below normal in the northern Utah high country. This weekend, Kelly Bradbury, Lynn Hulme, and I ran the last 9 miles of the Logan Peak Trail Run course. The previous weekend I had run the first 11 miles of the course. In many places there is a great deal of snow! Clearly several spring storms and much colder than normal temperatures have left the course with substantially more snow than typical for early June.

In Logan Dry Canyon, there is little snow until the location of Aid Station #1. From that point all along the south slope of Dry Canyon, snow is significant. I did not flag any of the course there, but runners/hikers should have no difficulty following my footsteps. Along the exposed west flank of Little Baldy and along the western part of the Welches Flat jeep trail in Providence Canyon, there is little snow. However, the eastern part of the Welches Flat jeep trail and the Providence Canyon jeep trail both have much snow—enough to make route-finding a challenge. 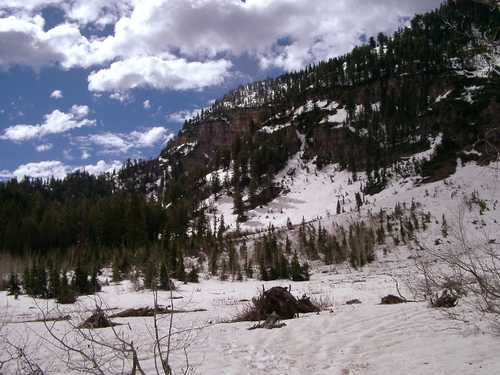 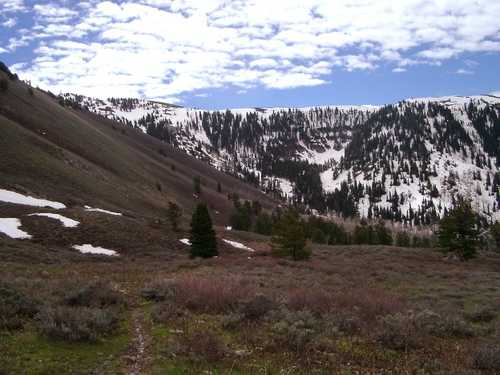 North of Logan Dry Canyon, there is quite a bit of snow. We lightly flagged the course going in the reverse direction from Aid Station #1 to about mile 19 on the course. East of that point, the course was effectivelly impassable due to extensive but very soft snow. Runners who wish to preview that part of the course will need to travel very early in the morning when the snow is firm. There are many large logs that have been cut in previous years to keep the trail open. Following cut logs will be the only workable route-finding strategy until enough snow melts to be able to see patches of the actual trail.

Although snow has been melting rapidly for the last few days, we are expected to have four or five days of colder than normal weather later this week. I expect the course will still have significant amounts of snow by race day—particularly on the climb to/from the peak and along the NE corner of the course.